Like so many sports, the 2020 shooting calendar has been impacted by the COVID-19 crisis.  Unfortunately, both the Bisley Schools Meeting and the Cadet Imperial competitions scheduled for July were cancelled.  I was also looking forward to taking part in the Kent Open in June for the first time, but this too was postponed until next year.

Earlier in the year I was lucky enough to be introduced to the OSRA (Old Suttonian Rifle Association) by Mr Westlake.  The OSRA are Sutton Valence School alumni who have continued to enjoy their love of the sport, long after their time in the SV shooting team.  They now regularly meet to competitively shoot target rifle at Bisley at distances ranging from 25m to 1000 yards.

Shooting clubs across the UK slowly started to open again during July, for socially distanced personal and club shooting. Anthony Bromley, Club Captain from the OSRA, knew I’d missed out on some competitive shooting during lockdown and kindly invited me to join the OSRA for a training day at the beginning of August.

It was a stunning summer morning as my Dad and I drove over to Bisley in Surrey, the home of British shooting.  There is always something special about visiting Bisley.  The National Rifle Association moved its official ranges from Wimbledon Common to Bisley in 1889. There are 7 major ranges, club houses and accommodation spread over 3000 acres of heathland.

We started shooting at about 10am on the 300x (300 yards) Century range.  I borrowed one of the OSRA club 7.62mm target rifles, but I was able to use my own shooting jacket and sling from my regular .22 target shooting.  This made a big difference to me being able to get into a comfortable shooting position.

The day was scorching hot but the Century range was still quite busy.  Many people were able to shoot for the first time in many months. For my first detail Anthony coached me on my shooting position and technique. 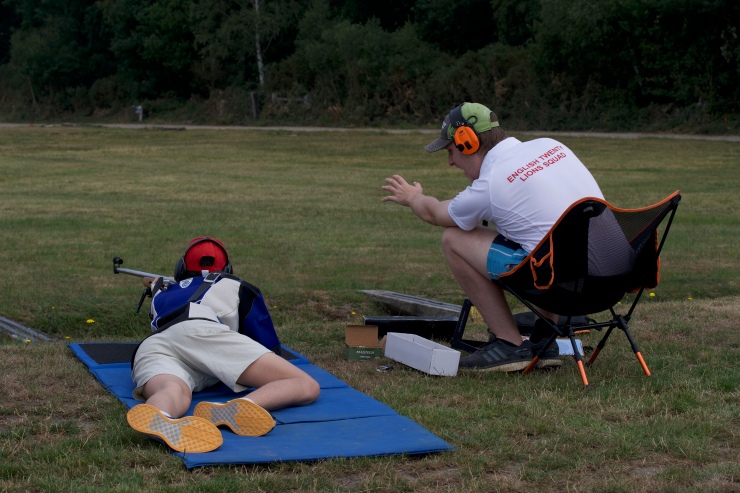 Being coached by Anthony on 300x

Effective full-bore target shooting requires a slightly lower shooting position than the small-bore I shoot most weeks.  This lower position reduces the greater recoil of a 7.62mm round impacting your shoulder and collar bone, transferring the energy though your body better.  It took me a few shots to adjust my normal position, but by the end of the detail I was starting to feel more comfortable and I was hitting the bull.  The fundamental techniques of small-bore shooting transfer well to full-bore shooting 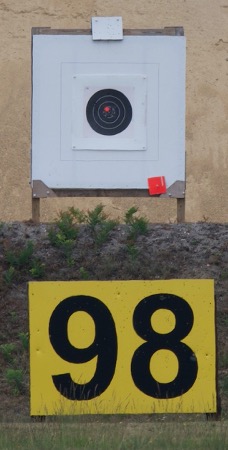 Targets for full bore shooting score 2 points for the outer ring, rising to 5 points for the bull.  So the maximum score for a 10 shot detail is 50 points.  But inside the bull there is another ‘centre bull’ ring called the V-Bull.  This scores an extra 0.1 to any 5 score for the bull.  This means the maximum score for a 10 shot detail rises to 50.10.  For world class shooters, these centre bulls make all the difference.

After a good rest and a lot of water to rehydrate, I settled in for a second detail at 300x.  This time another OSRA committee member, Chris Pawlik, kindly coached and spotted for me.  I scored a reasonable 43.3.  A couple of wayward shots scoring 3 brought my total down, but I did hit 5 bulls, 3 of them in the V.  I was more than happy with that.

After lunch we moved to the 1000 yard (0.57 mile or 914 metres) Stickledown Range.  I’d shot 300 and 600 yards with the CCF at Pirbright, but never shot anything as far as 1000 yards before.  The targets looked tiny in the distance and the mercury kept rising.  The temperature was hitting 34oc and the air between us and the targets shimmered in the oppressive heat.  Shooting positions were baking hot, with shooters dashing out, shooting their 2 sighters and 10 main shots, then dashing back to the cover of some shade.

Chris Youngman took over my coaching.  Despite the heat, I’d started to settle into the rifle and Chris advised me on the small changes needed at 1000 yards.  I had to focus.  Ignore the distance.  “Slow is smooth….” 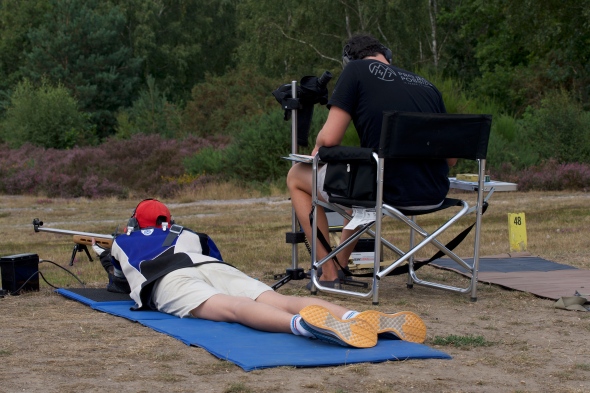 Chris Youngman coaching me on the 1000 yard range.

My 2 sighters hit the 4 ring, just outside the bull.  There was a slight right to left breeze and we adjusted the sights by a couple of minutes to try and take account of it.  My first shot was centre bull.  A V-Bull at 1000 yards?  Awesome!

My next 3 shots pulled slightly left again, into the 4 ring.  Maybe the breeze had picked up?  We checked the wind flags, but they seemed steady.  Chris thought I might be anticipating the recoil too much, gripping the rifle slightly too tight.  I tried to relax and control my breathing.

The next 4 shots were then clean.  4 more bulls!  Shot 9 pulled left into the 4 ring again, but my final shot scored the centre bull.  A second V.

The OSRA continue the great tradition of shooting at Sutton Valence, supporting both young aspiring shooters at the school like me and also alumni who want to keep on representing the school long after they have left.

I’d like to thank Anthony Bromley, Chris Pawlik and Chris Youngman for a fantastic day at Bisley and I can’t wait to shoot with them again.