After the remarkable turnout of the Imperial Veterans competition, OSRA longed to return to its second home of Bisley and shoot fullbore once again. Over the weekend of 6th-7th October, twelve OSRA members did just that.

Arriving early on Saturday morning, the bleary-eyed Old Suttonians prepared for what was due to be bleak shooting conditions. The forecast came true and our first shoot at 600 yards was hindered by the incessant downpoar, which naturally impacted our scores. Some of our members nevertheless managed to put in a good performance, with a 48.3 from Tom Fermor, a 47.2 from Chris Youngman, and a 46.2 from Anthony Bromley. 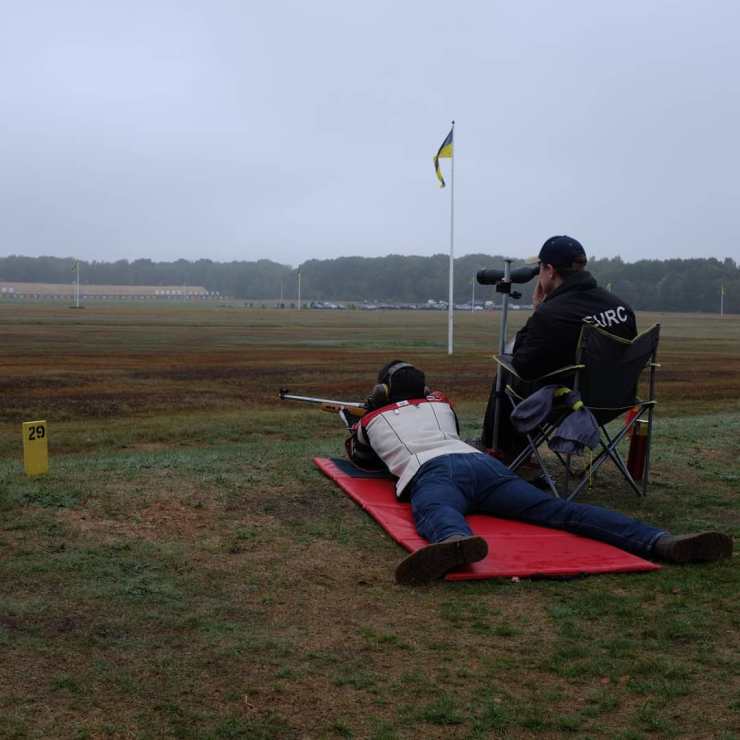 Moving onto 1000 for the afternoon, the billowing flags did little to bolster morale. With many Old Suttonians either huddling under the gazebo or keeping warm in their cars, each OSRA member stepped up one at a time to confront the hostile conditions on point.

Steady scores were produced by Freddie Pawlik (45.2), Chris Dale (45.2), and Chris Youngman (45.2), which are admirable performances considering the wind and weather.

At the very end of the shoot, Harry Percival stepped up to the point. Throughout the day, the ‘Percy Can’t Shoot’ sweep-stake had been arranged, for which members had to guess what score Harry would achieve at 1000 yards. Given Harry’s past performance at long-range, this really was anyone’s guess. With the bedraggled audience heckling every shot Harry put down range, the odds really were against him. However, rising to the challenge, Harry was able to put in a high score of the day for 1000x: 46.2. This really was exceptional under the circumstances. Harry received warm congratulations from the team.

To mark the end of the day, the Old Suttonians returned to the KCRA clubhouse, the Ibis, where the victorious Harry Percival cooked up a lovely pasta bolognese, before Anthony Bromley awarded prizes. Tom Fermor took the title of Fullbore Champion for 2018, whilst Chris Pawlik was awarded for his great performance in the Veterans and at the October Bisley shoots. Special mention should also go to Chris Youngman for his consistently high scoring throughout both shoots.

Having celebrated long into the night, the somewhat worse-for-wear Old Suttonians dragged themselves to 300x, where, under clearer skies, they were able to put in some better scores. This marked an uplifting conclusion to a thoroughly enjoyable weekend.

OSRA’s first fullbore weekend was a runaway success. It was fantastic to get the team together, and see them shooting to a high standard despite the miserable conditions. The continued high level of shooting shows great promise for the competitions in 2019, in which many OSRA members will hopefully compete.

Well done to the team; we await what they will achieve next.